The bicycle shop project has come a long way. Looking back to July 2016, when the first two containers with 800 donated bicycles were offloaded in Kasane, much has happened since then and even more is to come. 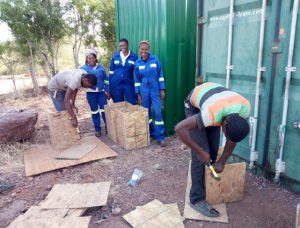 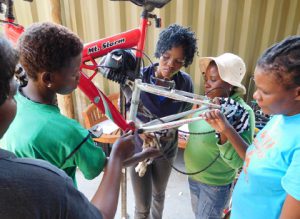 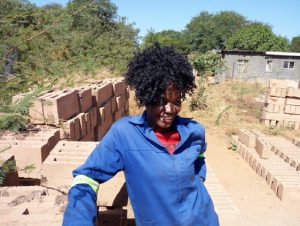 Three shipping containers are currently being converted into a workshop – one container sectioned into two small offices with additional space for tools, one container to serve as storage space and the third container to house all rental bicycles and accessories.

Guests will soon be treated to a completed bicycle workshop, where they will rent from a more organized business with five happy bicycle mechanics. With the construction of the workshop now underway, the group is recharged with new energy, especially at the realization that the long days of fixing bicycles under the African sun are behind them. Thank you to our guests for their contribution towards this project; we now have enough funds to start and complete the construction of the building. The excitement has been contagious, with the public’s attention drawn back to ongoing construction at the bike shop as the new structure is taking shape.

AKP’s enterprise programs are an example of how we approach poverty reduction. We don’t believe that providing handouts is the solution to solving the economic problems of our partner communities. Instead, we work toward educating, guiding, and training individuals so they can build their own businesses. Our bike shop programs are sustainable – and successful – because we create structure and support for women to run their own enterprises. All AKP bike shops in Africa follow the same model. When a sale is made, the women set aside a fixed percentage for salaries, shop maintenance, payment of restock shipments, and even to invest back into their communities. The five women running the Dipetsana Bike Shop, Mary, Ntumi, Gee, Chine, Letsweletse are not only trained bike mechanics – but have also become fierce business women and role models in the community.

Last year all five women reset their lives and set new personal socio-economic targets for themselves. Solid brick houses appeared on the plans for a majority of them. Gee has since become the first among the five to get closer to achieving one of her targets, and that is building a house for her two children. Gee’s life took a different course after losing both parents. A sibling of six children, her two elder sister quit school as soon as their parents died, to look after their little brothers and sisters. Life became harder than they thought and all the young children were registered as destitute by one of the Botswana government relief schemes. A two-roomed house was built for the children through the scheme. Now grown up, with two of her own children, Gee is determined to build her own house and move out of her current home, which she shares with 11 other people. Because of her job at the Dipetsana Bike Shop, Gee has sucessfully saved up enough of her income to purchase bricks to begin the process of building a home of her own!

The Bike Shop & The Guest Experience

We strongly encourage guests who are staying at Sanctuary Chobe Chilwero to visit the Dipetsana Women’s Bike Shop and go for a bike ride! Cycling around Kasane exposes guests to the ever-enchanting Chobe River from spectacular look out points, but also immerses them right into the culture and ordinary way of living for people from this part of Botswana. Although a small tourist town, Kasane portrays rural and traditional practices mixed with modern Botswana, and these characteristics are visible at the The women from Dipetsana with Shex and A&K guests local market, on buildings, on the road and among the people walking the streets along the cycled route. For more advanced cyclists visiting Botswana and Zambia, guests now have the opportunity to go on a bike ride from the Chipego Women’s Bike Shop in Nakatindi, a village just outside Sanctuary Sussi & Chuma in Zambia to the border / river crossing at Kazungula. The route is terrific: relatively flat, no steep inclines, beautiful morning views of rural Zambia, bird life and potential of wildlife. There is plenty of space on the side of the road to allow for bikes without having to be on the main road competing with vehicles.