Rhino translocation is the largest conservation initiative in Botswana, and indeed the region. Both black and white rhinos have been reintroduced into wild Botswana, with mass reintroductions in 2016 and 2017. From being locally extinct in an environment where they initially roamed free in thousands, seeing rhino back in the wild alone is a massive achievement. Since the rhinos were introduced, the work of AKP’s rhino monitoring team has only just begun. 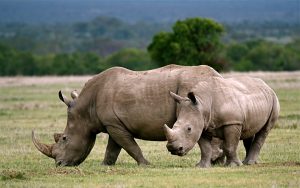 AKP has demonstrated commitment to the program that has taken rhino monitoring to another level. In April 2017, AKP hired a team of two Conservation Officers dedicated to protecting the species in Botswana. Equipped with a converted Toyota Landcruiser, the team is ready to rough it up in the wet and muddy Okavango Delta landscape every day. The amount of data collected in over a year’s monitoring is incredibly important for the survival of the introduced rhinos, as well as those born after parents were reintroduced. The data provides information such as home rages, territorial claims, male to female ratios, herd sizes (white rhinos) social behavior and feeding and breeding patterns.

The rhino monitoring team is gradually acquiring monitoring equipment necessary to make their work possible. Thanks to A&K UK office for their fundraising efforts, the team was able to acquire a brand-new GPS unit. Not just an ordinary GPS device, this piece of equipment comes with the ability to send and receive messages. We are in the process of acquiring even more equipment for the team. 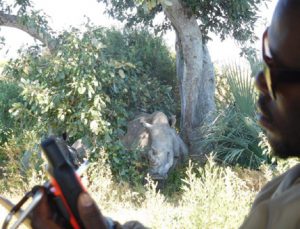 Partnering with University of Oxford

Since March 2018, the monitoring team has been working hand in hand with Wildlife Conservation Research Unit (WildCRU), which is part of the Zoology Department at the University of Oxford. WildCRU is studying the movement of predators, particularly lions, in and out of the Okavango Delta. In doing so, WildCRU has planted camera traps across the entire Chiefs Island in grids of 4km by 4km. There are 11 of these cameras in the area our monitoring team is active. These cameras are generating incredible information, including the first picture of a black rhino mother and calf. 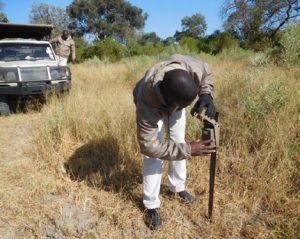 Exposing guests to the rhino reintroduction and monitoring project remains a top priority. Lunches and sundowners at the rhino boma remain one of the more personal and powerful ways of informing guests about the project. Due to its size and the purpose it has been constructed for, the boma is a significant feature that stays in the memory of many guests, which allows the information discussed while touring the boma to also be remembered. This has been confirmed by the amount of positive feedback received from guests that have been led on a tour of the boma by monitors, and had lunch or a sundowner there. The boma is therefore a must visit!

Guests now also have the opportunity to join participate in an A&K-exclusive Wildlife Monitoring experience. By joining the Conservation Officers on their morning or afternoon wildlife monitoring expedition, guests will be able to gain privileged access to restricted areas of the reserve while tracking rhino and other precious species.